There are many objects, mediums, and surfaces that are used for baking and cooking. They are used so that the food can have a variety of taste and flavor in them. Now, a pizza stone is a portable cooking surface that can be used for baking different types of delicious food, especially pizza.

However, there is also something else people can use in place of the stone to bake their pizza in, and that is pizza steel.

They come in different sizes based on the size of the pizza you might be making. Both have their own advantages and disadvantages, which is why one is chosen over the other based on the requirement.

A Little About Pizza Stones

These are designed specifically to bake pizzas and are also known as baking stones. Made usually with ceramic, salt or stone, these create a surface of one sort on which pizzas are placed before they are put into the oven for baking. The stones are used to sort of mimic the effect of baking a pizza in a masonry oven.

This is used as a surface, much like the cookie sheet is used for baking cookies because of the effect it has on the pizza crust. The brick and stone maintain the heat and are able to create a unique crust. 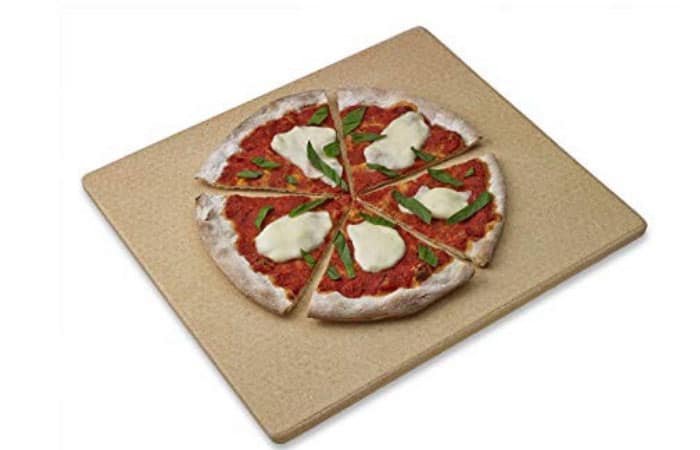 Also, the porous nature of the stone allows only moisture in the dough to be soaked in, which results in the crispy crust that everyone enjoys eating.

There are actually a few types of pizza stones available in the market for you to purchase. The stone is the most common and popular, however, there are others such as ceramic, cast iron, and cordierite, all of which have their unique effect on the crust as well as the overall outcome of the pizza.

Pizza stones come in a variety of sizes, but the commercially sold ones are just the right size to fit into an average size oven. This is done so that people buying it don’t have to go through the hassle of buying one that does not fit into their oven.

A Little Bit About Pizza Steels

Now much like the pizza stone, this too is used for the purpose of baking the pizza in the oven. However, this is going to have a bit of a different outcome compared to the stone, and that is mainly because of the type of material the product is made with.

These are also referred to as baking steels as they are not just meant for baking pizzas, rather they can be used to make just about anything in the oven. The results are quite good and very satisfactory. This is known as a powerhouse among chefs, as they are so commonly bought and used in the culinary world.

The main reason why this is so popular is its ability to retain heat. As it is made of steel it is a better conductor of heat and is able to cook or bake the food in a different way which has also proven to be a very efficient way.

Pizza steels are able to transfer heat at a much higher rate, so it is able to cook the food much faster. That is, the steel is able to stimulate a steady level of heat throughout the entirety of the pizza. So, you will be able to get a perfectly cooked pizza by the time the timer of your oven dings.

Oh! And one of the most significant parts of the pizza steel is that it gives the crust a crispy finish, something desired by all.

As the pizza steel is made purely of steel, it heats up very fast and then is very quickly able to transfer the heat to the pizza crust or any other food on top of the surface.

Not only is it good at heating up, but the steel is also very effective at retaining the heat, meaning that it is able to hold in a lot of the heat from the oven. This is a very important factor to consider when you are baking pizza.

Now, another good thing about pizza steel is that it can be used on the stove top as well as the oven. So, not only can you pop it in the oven to bake and cook, but you can also get the job done on your stove. This works on both gas and electric stoves, so it should work with whatever you have at home.

One very good thing about this would be its life expectancy, as with the material steel, there is no chance of breaking if it happens to fall. Another reason why this might be a good option for people is that the steel is not prone to thermal shock, which also leads to a longer shelf life.

Like it has been mentioned before, pizza stones are usually made of stones, ceramic or cordierite. Something they all have in common is the texture, which is something very important for the pizza making process.

The stone is able to absorb all the moisture of the dough and as a result, you will be left with a dry and crispy crust. Also, because of the type of material the stone is, you will find that it will heat much more evenly than the steel. As a result, the pizza you’re making with it is cooked evenly throughout.

So, the most amazing thing about the stone would be its price. You can get a great looking and tasting pizza using a stone which is less than half of the price of the steel. What can be better than being able to get something good at such a low price? Nothing!

However, everything comes with a downside to it, and just like everything this too has a few major drawbacks. The stones are more prone to thermal shock, which means that it can actually shatter if put under too much heat.

You can also drop it by accident and that would also end in pieces. So, all in all, the stones have a much lower life expectancy.

The Difference In The Clean-Up Process

There are a few differences in the ways that you are supposed to clean up either of the utensils.

Pizza stones are very delicate and have to be cared for in a very particular way, otherwise, you will not get the same outcome from it.

Once the stones cool down after the cooking, you should scrape off all the residue off the surface. You can use some baking soda on a brush to clean them. All you have to do is wipe it with soda and a washcloth.

However, you must avoid using a bar of soap or soap of any kind on the stone as the soap will seep into the pores of the stone and at the end, you might have pizza that tastes a bit soapy. That is something no one wants.

Another element you must avoid is oil, the oil is going to clog the pores of the stone, much in the same way it clogs up our skin. This will take away one of the good features of the pizza stone. The stones are seasoned upon use, there is no need to season it as you would have to do for a cast iron.

Unlike the stone, you can easily go in and use soap to clean up the surface of your baking steel, however, try to avoid using any type of harsh detergent on it as it might have a lasting effect on the metal and you will have difficulties in baking on it in the future.

Avoid using cold water to clean the baking steel, especially if you just took it off the heat or are planning to put it back into the oven. Even though it is less prone to getting a thermal shock, the constant ups and downs in the temperature will cause it to undergo a thermal shock and you will end up with a wrapped metal.

Last but not least, as this is a metal, rust might be something you have to deal with. In case you do spot some rust on the baking steel then all you have to do is scour it off with steel wool or even sandpaper will do in this regard.

There are some very obvious differences between the pizza stone and pizza steel. Both are good for different purposes and cooking methods. Now, which one might be good for you to purchase depends solely on what type of pizza you might enjoy making and cooking.

Your budget might also be a factor in this, but when it comes down to it, the pizza steel might have a higher initial cost, but as they last much longer than the stone, they might not be a bad choice.