As far as the eye can see, the broad landscape of Wrington Vale and the Mendip Hills stretches like a rolling green patchwork blanket to the distant horizon. I am standing under an archway in the Barley Wood Walled Garden, just south of Bristol, staring at candy coloured blossom on espalier and cordon fruit trees, growing their slender branches across lichen covered, sunlit Victorian red bricks. The garden slants down a gentle, south facing slope, towards a majestic wooded valley, and all around me are the determined chirrup of birdsong, the hum of bumble bees and the tinkering of glasses and crockery.

Barley Wood Walled Garden was constructed in 1901 for Henry Herbert Wills, the founder of the Imperial Tobacco Company. After his death, the walled garden fell into dereliction, but was saved by the present owner in 1993. It was opened to the public in 2000, and it remains open every day of the week. There are also artists’ workshops and galleries in some outbuildings at the bottom of the garden, beyond the walls.

Standing at the top of the enclosure, nearest to the road, is a long glass fronted building, housing the Café and restaurant, now run under the auspices of “The Ethicurean”, a partnership of four chefs, Ian and Matthew Pennington (brothers), Jack Bevan and Paola Zarate, Ian’s girlfriend. Jack’s mother Wendy is helping today as a waitress, and she also picks salad leaves in the morning, for the chefs to prepare in the kitchen, as side dishes or decoration. There are also three apprentice cooks. The whole team is committed to local, sustainable, organic, seasonal cooking, drinking and eating, and each tiny detail in their layered and elegant offering is testimony to their beliefs.

All around the kitchen are painted timber framed glass frames, concealing beds of early lettuces, small herbs, spring flowers and edible wild leaves. The larder for The Ethicurean chefs is all around them: it is not a room, it is a plot of soil. Fresh asparagus spears are just jutting out of the sandy raised beds stretching long and wide down the grassy slope. There is fresh rhubarb, spring cabbages, early carrots, small beetroots, tender kale leaves, a large array of salads and fresh herbs. Soon the soft fruit bushes will be heaving with raspberries and currants, and strawberries and gooseberries will also be filling the summer pudding Menu.

The height of the walls and evergreen hedging around the kitchen garden provide a microclimate protective boundary, the soil is black and crumbly through years of care and organic nutrition and small mounds of rotted manure and compost can be seen dotted in position to feed new planting.

I walk out with Andy, a kitchen porter and soon-to-be baker of the restaurant. He is a great fan of Andrew Whitley’s work, “Bread Matters” and waxes lyrical about what a great job he has here at the walled garden, how he looks forward to staff meals, and how much Jack, Matthew and the team have all achieved at such a young age.

I have to agree. Everyone on the payroll here looks like they actually belong on the books of a London model agency. They are so young and beautiful, how can it be possible that they have managed to create such a well-run and efficient restaurant without the benefit of years of trial and error, hard knocks experience and wily business acumen?

On the wall next to the cheese counter I read a Fork magazine article written by Jack and Matthew. It says:

“There is an interesting self-reciprocating relationship between friendship, happiness and food. The most memorable memories we have revolve around the time we have shared meals with friends and family”. 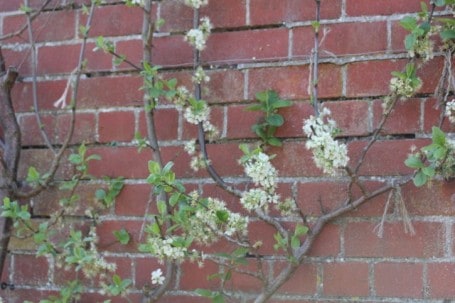 In the main restaurant area there are shelves lining the walls, and in serried rows of provincial celebration stand bottles of local beers, ciders, ales and juices. Surrounded by lush meadow grass and beehives, the Barley Wood apple orchard is home to a wide variety of trees, ranging from Beauty of Bath, Peasgood and Nonsuch. They are squeezed with their own apple press and made into a very fresh, zingy and aromatic juice I drank with my starter.

Here is what we ate:

One after another, like a continuum of delight on a confident conveyor belt, each plate is a small triumph of freshness, vibrancy, seasonality and meticulous attention to detail. The hands in the kitchen season delicately and leave the upper tones of flavour to the lady that knows how to do them best, Mother Nature.

The wine list is quite small, well chosen, European and features a great number of wines by the glass. In addition, there are three measures of glass. Bottles range from £15 – £25. Even the bottled water is local, sourced from Leigh-on-Mendip, Somerset.

The furniture for the restaurant was bought from the Wells Reclamation Yard, and the vintage crockery comes from a village shop in Wrington itself, a picture postcard charming village that boasts a pub, several shops, a post office and a church and cemetery that would not look out of place in an Agatha Christie episode of Miss. Marple.

In Barley Wood the Sunday lunch customers are all having their puddings and coffees now, a soporific air of happiness and peace has settled over the tables as bees swoop in the incandescent light, nestling in the herbaceous borders and whizzing their way in and out of the glass houses.

The future looks busy. As we chat to Jack he is excited about the Cheese School and apple pressing event they are plotting for the autumn with Trethowan Dairy and Jamie Montgomery’s dairy that supply them with fresh cheese. He looks forward to the harvest of all the seasons, and in particular, the thought of fresh figs, pears and cobnuts. The Ethicurean venture has only been at Barley Wood for six months, so they are still plotting and planning the way forward. Evening openings have been planned for April 16th and 30th as well as May 15th 2011.

With a wide smile and a twinkle in his eye, Jack waves every customer off with the charm and relish of a happy restaurateur who has found himself in a very happy place. The Ethicureans may be very young, but they have learned well the most important three words in the canon of business endeavour. Location, location, location.