I was intrigued when I first read the new food blog, She Shops Local, and I remember wishing I had thought of the name myself.  It is the online journal of Anna Herbert who has set out on a mission to cook her way through Elizabeth David’s seminal cookery book “French Provincial Cookery”, across the seasons, and doing so by only shopping locally.

Now when it comes to the foodie postcode lottery, Anna has certainly drawn the winning ticket, as she and her husband, the baker Tom Herbert, live in an idyllic cottage practically within walking distance of Nailsworth. This pretty Gloucestershire town boasts several foodie shops, and amongst them is the much beloved William’s Kitchen Food Hall. There are lovely lanes filled with independent shops, including a florist, greengrocer, organic shop, cupcake shop, pottery shop, hardware shop, clothing shops and, of course, Anna and Tom’s family business, fifth generation Hobbs House Bakery.

I went to Anna’s house for lunch to meet her and to find out how she began this new venture and how it was all going. In her airy kitchen she revealed that good food has always been in her genes, as her mother cooked all the family meals from scratch. Anna and her sister wanted to stay up and eat with their parents, but the family tradition was such that the children had to go to bed early, and the adults ate later. As a result little Anna held a burning childhood ambition to make and eat adult food.

She met her husband Tom at school, they have been together 15 years, and have always lived in and around this area while all their other childhood friends moved away. Terroir, as the French would call it, is in their blood. Anna makes vintage childrens’ clothing, which she sells, you guessed it, locally at The Little People’s Company.

Last Christmas, in December 2010, she decided she would do all the Christmas shopping for her four children, the youngest of which is only 2 years old, solely in Nailsworth, an easily achievable task bearing in mind the number of beautiful gift shops there. This sparked in her conscience, however, a conviction that as she was part of a small local family business, the onus lay on her to show support for the community of traders amongst which she lived. She has not been to a supermarket since. Armed with Elizabeth David’s work she has resolutely stuck to her principles, and created a Blog to recount the ways in which she has achieved this challenging ambition.

I asked her, how, in reality this works. Surely there must be some things she has to buy from the supermarket. “Not really” she said, “If you look hard enough you will be able to find most things locally. We are really fortunate here in Nailsworth that we do have a very good selection of small independent shops, but I believe anyone can do what I am doing, if they set their mind to it”.

How does she carry all the shopping? “The solution is to buy little and often, and having a baby buggy is also very useful – we just strap things on, and we also use the cloth bags from Hobbs Bakery”, she replies.

Anna has found she spends less money, by not being side-tracked by offers to buy more than what she actually needs. Elizabeth David’s recipes are all very seasonal, and as a result there is an element of repetition that the children sometimes complain about “Towards the end of the winter we were a bit fed up with the game: partridge, hare, venison and so on. But, for example, last week some friends came to stay and I cooked a roast goose. We were so well fed, and also had onion soup, and watercress with hardboiled eggs as well as roast potatoes. With the bones I made goose stock and with extra flesh I made rillettes”

We sat there tucking into emerald coloured nettle soup, the children having picked the nettles themselves, covered in gloves and woolly jumpers. The food was delicious: a fresh green salad with anchovies and eggs and fresh bread from the bakery. The goose rillette was moist and tender. To end there was a gorgeous dark, rich chocolate cake. “That’s the only tricky part about French Provincial Cookery” said Anna “The puddings.” We surmised it was because French country people were more likely to eat cheese or fruit after a meal. There are times that the Herberts have steered away from the French repertoire to satisfy “curry lust”. But by and large they have stuck to the one recipe book, and every Friday they have created “Little Chef Friday” events when the two older children, aged 9 and 7 years of age are able to devise their own menu and they all go to town together, the children on scooters, to seek out the ingredients, which the children later prepare for their own supper. 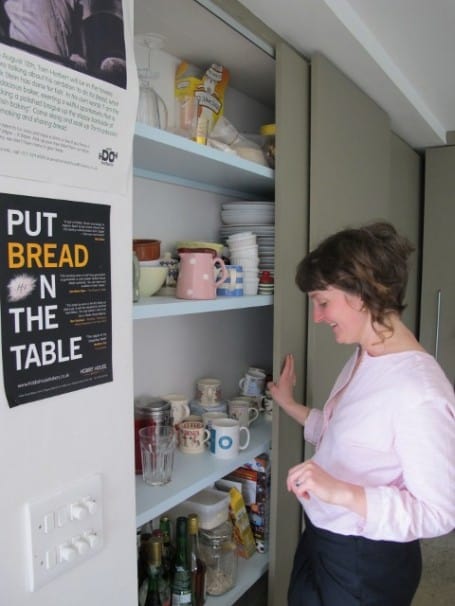 The basis of Anna’s philosophy is founded on simple tenets, “Eat less food but better quality, try to grow as much as you can yourself, and if you are really struggling financially, cut down on meat” she says. Wheat prices have doubled in the last two years, and all artisanal bakers have felt the impact of this, along with ever increasing labour and utility costs. Anna knows about having to shop on a budget. She has also noticed that by buying locally sourced fresh ingredients her children have not been sick all winter. She makes lunch boxes for the whole family, as Tom takes one with him to the bakery in Chipping Sodbury, the HQ of the family company. For her bread preferences she chooses the 7 seeds loaf for the children and for herself she chooses the Pumpernickel bread.

Anna is optimistic that more and more young people are now becoming interested in food and in entering artisanal food professions. Their Hobbs House bread baking kits, replete with 55 year old sourdough in a jar, sell in great numbers, as do their breadmaking courses, taught by Tom himself. All around her  area she sees a growing and enthusiastic  upsurge in local artisans, like Winstones Ice Creams, Jess’ s Ladies Organic dairy, and, of course, her own brother-in-law Henry Herbert has started trading in the butcher’s shop right next door to the family bakery in Chipping Sodbury.

As I leave Anna to her school run, it is early afternoon and I head back to Nailsworth for some food shopping. As I sit in Hobbs House bakery, surrounded by wonderful cakes and breads, I do think to myself that the Herbert family are extremely lucky to live in such a wonderful foodie town, but even if we all lived in such a place I am not so sure that many could be as resolute as Anna, in such a disciplined and focussed way. She has shown the townspeople a level of support that transcends the normal apathy and laziness that would lead most mothers straight through the familiar yellow doors of the local Morrisons Supermarket.

That little girl who hankered after adult food has certainly achieved her childhood dream and then some. She has also achieved marrying, shopping, eating, working, living and gardening locally too.