It was in December 2008 at the Farmer’ Market at Green Park Station in Bath that Duncan Glendinning set up a small stall selling homemade bread baked in a  clay oven in his garden. He asked the customers who came to taste his wares to write on a chalk board what they thought of his work, to help him decide whether there might be a future in giving up his job as a website designer and selling artisanal breads instead. The response, from people of all ages, was unanimously positive, and so The Thoughtful Bread Company began to take shape.]\

Teaming up with his Chef friend Patrick Ryan, Duncan set up business just outside Bath, producing hand made, hand turned, preservative and additive free breads and selling them at a shop stand at Green Park Station. They were inspired by the work of Dan Lepard and Peter Reinhart and were working every hour in a very small space to get their fledgling company off the ground.

Serendipity took its own fortuitous turn when Andrew and Tish Jeffery of Farrington Gurney Farm Shop, near Radstock, offered then a really big warehouse space for their bakery on the grounds of their 350 acre mixed farm. At the same time Michael Caines re-designed the kitchens at The Bath Priory Hotel, and Duncan and Ryan were able to buy workbenches, sinks and accessories at knockdown prices. They bought dust cloths from Sainsbury’s Homebase to use as proving couche cloths and even used vintage steel bins on castors as flour containers. By March 2009 they were in business. Thoughtful by name and thoughtful by nature, sustainability is at its core and underpins its every decision. Re-cycle, re-use, re-love is the mantra.

“All of our equipment is second hand. We did not have the money, when we started in March 2009, to buy lots of brand new things, so we went round the whole country with a van picking up second hand equipment from bakeries that had shut down. We run our own delivery van on bio-diesel, we barter fruit and vegetable gluts for fresh bread, we feed the chickens and the pigs on the farm any left overs and we source all our ingredients locally, or grow them ourselves,” Duncan tells me. He proudly shows me his herb bed and his mini-chilli plantation in an Eden Project inspired poly-tunnel, heated solely by the sun. All around the bakery are sheep, pigs, chickens, ducks and pasture land. A thriving farm shop is a point of sale literally twenty metres away.

I watch as James, one of the eight bakers, rolls out Bath Buns for next day delivery, placing a whole sugar cube at each centre. All the doughs, (white, brown, sourdough, seeded, granary, beetroot, nettle, rye, cheddar, potato, brioche, croissant …)  prove either overnight or for a minimum of 4-6 hours. There are mixers in the building, but most of the work is done by hand: heavy, bulky, intricate and lengthy, the doughs and methods of artisanal bread making are extremely demanding and require intensely physical hard work.

“You cannot count the hours in this profession,” Duncan tells me, as Patrick folds and rolls the sourdough loaves, his hands moving in repetitive rhythm, the dough in front of him slapping and turning with speed and precision. “My wife says she never sees me.” 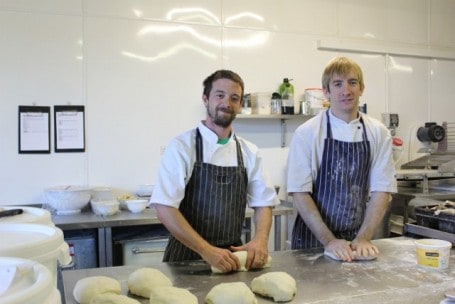 The Thoughtful Bread Company is now working at nearly full capacity, selling bread and pastries to nearly 40 wholesale outfits, including farm shops, delicatessens, cafes, food halls and restaurants, all in the South West, within 30-40 miles of Bath. They are also working with Harrods and are hoping that they will, in time, be supplying them too.

“The problem with bakery orders,” Duncan explains, “is that everybody wants bread on Fridays and Saturdays, so then we are stretched to full capacity. It’s the beginning and middle of the week that we are less busy.”

“Less busy” is a relative concept in the life of bakers: Duncan and Patrick still have to deal with the never-ending, grinding business side of the company in terms of book-keeping, hiring, marketing, getting bills paid and dealing with customers. There is also a new book, “The Bread Revolution”, published by Murdoch Books, due out in March 2012, and their bread programme is due to be shown on prime time television in November 2011.

In the book they have included a flip page for every dough recipe, so once they have made the breads, readers are shown recipes, ideas and accompaniments of what to do with the end results.

“Bread is not just there for sandwiches,” Patrick says. “There are literally hundreds of things you can make and create with good bread, you need never waste it. Our book aims to bring bread back as the king of the table.”

The pace of the last three years has been unrelenting: aged just 25 and 27 when they started, Patrick and Duncan have already accomplished what many artisanal food producers aim to achieve in a lifetime.

The stall at Green Park Station in Bath is run by Ross Davies, and he is the interface between the company and the public. The plan is, one day, to be able to find premises nearby that could also function as a bakery-café, or community hub, where the bakers could teach courses and share their passion face to face. The piles of Danish pastries, mince pies, cinnamon buns, baguettes, loaves and rolls at the stall are all beautiful and delicious, but it is obvious that the standard of baking and the quality of the produce deserve a shop or café of their own. There is plenty of confidence for the future:

“There is definitely a real bread revolution taking place in Britain today. More and more people are intolerant of supermarket bread, with its chemicals and its fast yeasts. The Real Bread Campaign has been instrumental in educating consumers and supporting the artisanal bread makers, as has the School of Artisan Food. We definitely need to provide more training for young people to come into the industry, and more people should be looking to buy quality bread, bread that tastes better, lasts longer and is better for your health. It is exactly the same argument as buying good meat or good fish: buy less food, but make sure it is good quality and of good provenance,” Duncan says.

All around me the racks of prepared breads are being rolled, to the side of the bakery, left to prove under plastic sheeting. As soon as this interview is over Duncan has another meeting lined up, and James and Patrick keep rolling, turning and mixing. I ask them all what advice they would give to young people reading this article who wanted to train as artisan bakers and set up in business. The answers are clear and concise: