There are many hidden treasures in Northern Ireland but surely none more inviting than that Ulster culinary speciality ‘Champ’: mashed potatoes mixed with chopped scallions (spring onions) that have been softened in hot milk.

Made correctly, this essentially peasant dish verges on the sublime, delivering a pleasure quota well beyond the sum of its parts. Salt and pepper (white for preference) also come into play, and of course, butter, and plenty of it.

Tradition dictates that a font of melted golden fat is also created in the centre of each individual serving, into which each forkful is dipped en route to the mouth. 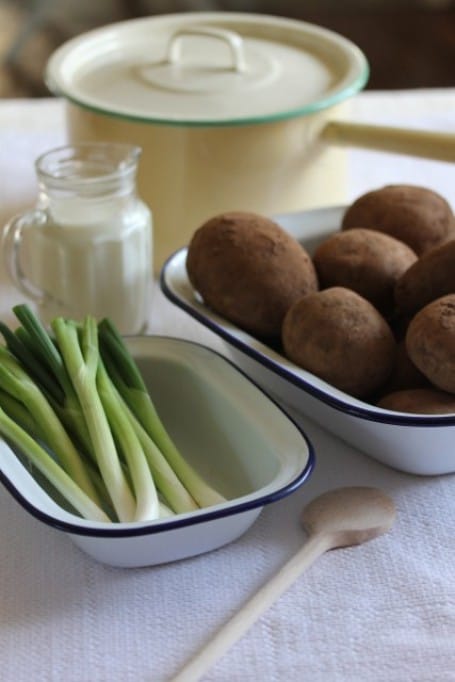 The origins of Champ are plain enough: it originates from the firesides and kitchens in farmhouses throughout the Ulster countryside, where the potatoes would have been bashed with a long-handled wooden pestle known as a “beetle”.

This action explains the dish’s alternative name, “poundie”. The derivation of the term “Champ” though, and its bearing on the dish itself, is less clear, although it’s assumed to come from Ulster-Scots, the curious tongue that evolved between locals and settlers from neighboring Scotland over several centuries.

The primary meaning of the word is found in the Scottish borders and refers to a stretch of ground trodden into a miry state, or quagmire; the Scottish National Dictionary, meanwhile, reckons it’s probably the same word as in English — that is, “to crush with the teeth, munch”.

Either way, the dish’s name would again appear to relate loosely to the method of its making (though why this shouldn’t apply to straightforward mashed potato as well is a mystery).

Other specialities of Northern Ireland, whose cuisine, few would argue, is notable more for the quality of its ingredients — superb meat and shellfish among them — than for its sophistication, include soda bread, the umami-rich, air-dried seaweed “dulse”, Tayto cheese & onion crisps, and the fearsome Ulster Fry, but none, I would contend, express the taste of the place quite like Champ.

Purists say it’s best enjoyed on its own: a large steaming bowl of it, ideally on a rainy day in front of a well-banked turf fire, but it is also a splendid accompaniment to sausages or baked ham and a satisfying backdrop for beef stew or a slow-braised lamb shank.

Tweaks and variations include the addition of chives, parsley, peas, leeks, or even young nettles, and (heaven forfend) the substitution of olive oil for butter. (In southern Ireland “colcannon”, mashed potato with shredded cabbage or kale, is more prevalent.

Some will ramp up the luxury factor, and the cholesterol count, by using half milk, half cream, though this strikes me as perhaps a step too far from the thing’s spartan genesis. I’ve heard of grated cheddar being stirred through at the last minute, encountered those who advocate a whisper of nutmeg and others who swear by a bay leaf dropped into the hot milk, but as with many things, simplicity is usually best.

120g. butter (or more according to taste)

Trim and finely chop the scallions and place in a pan with the milk and as much butter as your conscience will allow (I would regard 120gor a quarter pound as a bare minimum).

Bring the mixture to simmering point for a minute or so, without scalding the milk. Remove from the flame, stir the mixture and leave to infuse.

Peel the potatoes, cut into chunks and boil until tender. Drain and set back on the stove-top for a minute or two to let the residual heat drive off some of the steam.

Take a masher and crush the potatoes to the consistency of an even “rubble”, then sprinkle with two teaspoons of  sea salt  and several generous grinds of pepper.

Pour in half of the infused mixture, including most of the scallions, and beat through with a fork, adding more milk as you go but being careful not to add too much liquid. A lightly whipped consistency is what’s desired.

Taste for seasoning and serve piping hot with extra butter to hand for the traditionalists.

Note: Left over Champ is excellent moulded into patties, dusted with flour and fried gently for five minutes on each side as the centre piece of a cooked breakfast that includes crisped bacon, tomatoes and the crowning glory of a soft-poached egg.