Pimlico Road is one of the prettiest places in London for shopping, walking, browsing and eating. It’s beguilingly village-like in atmosphere, despite being an arterial road at the confluence of Lower Sloane Street, Buckingham Palace Road and Ebury Street.

According to the architectural historian Nikolaus Pevsner the name “Pimlico” is thought to have derived from a drink no longer known, and the district was first inscribed in the rate books in 1626.

On one corner of the main high street sits the handsome stone church of St. Barnabas, a place of worship and learning since 1850, with a small primary school attached.

Overlooking it is The Orange, a former brewery, on four spacious floors with ceilings that sore upwards and large windows that look out onto glamorous shops and the apotheosis of floral magnificence, the Wild at Heart flower shop. 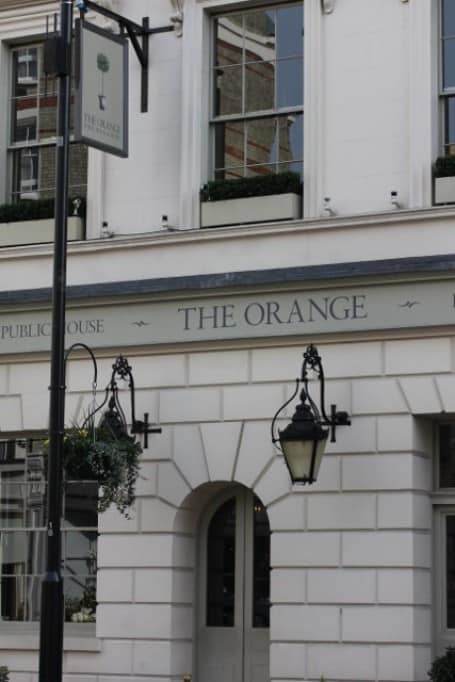 The Orange forms part of four pubs-restaurants-inns in the Cubitt House stable, owned by property developers Barry Hirst and Stefan Turnbull. The business is named after Sir Thomas Cubitt (1788-1855), the famous Georgian architect commissioned by the Marquess of Westminster and the Duke of Bedford to create some of Belgravia and Pimlico’s finest houses.

“The London Encyclopaedia”, published by Macmillan in 1983, informs us that in the middle of the 1830’s Cubitt obtained leases from the Grosvenor Estate and began to build lesser fashionable houses than he had previously constructed in neighbouring Belgravia, “digging up clay from under the gravel, to make bricks and depositing earth excavated from the St. Katharine Dock”.

The locations of the Cubitt House inns and pubs are all central, in Belgravia, Marylebone and Knightsbridge as well as Pimlico, and it is interesting to see that a common thread of sourcing, cooking, interior design, staff training and presentation runs across the group, whilst still respecting a “sense of place”.

When The Orange brewery building was originally constructed most of Pimlico would have been a muddy backwater, surrounded by fields and trees, osier reed beds to make baskets, market gardens to supply the burgeoning population of London and waste land, to dispose of its detritus.

Glamorous and affluent it was not, and in Trollope’s “The Small House at Allington” {published in 1864} newly married Lady Alexandrina de Courcy shunned the address as being too lowly for her status in Georgian high society.

The brewery was named after William of Orange, the Protestant Dutch Prince of the House of Hanover who invaded Britain in 1688 and deposed King James II during what became known as “The Glorious Revolution”. The brewery originally started as the Orange Coffee House and Tavern in 1776 and then was named the Henry Guest Pub in 1876, after its owner.

When you enter The Orange the first impression is one of informality and comfort. The look, I am reliably informed, is called “shabby Chateau” – one coat of paint on the walls that look distempered, distressed French painted furniture, wooden floors, decorative cornicing, wrought iron and glass lamps, hand-blown glassware and red-stitched linen napkins. God is in the detail and every detail has been thought of – you could be in a handsome Gloucestershire town tavern, for all your know.

The ground floor is the pub area and has a relaxed dining room that takes no reservations, and this is where the breakfasts are served for the four bedrooms that are on the top floor of the building.

There is an atrium floor in the basement that looks upwards through a glass conservatory roof, where you can see fresh herbs planted, and beneath is a large party room that can host up to 40 people for dinner. The first floor dining room is slightly more formal, more fine-dining in feel, but still relaxed enough for you to come with the family and small children.

And right in the middle of SW1 you have a brigade of 30 front of house staff and 20 chefs from every nationality and background you could imagine, along with customers from all parts of the globe. This is the place for fashion, trends, beauty and language spotting – it’s all there.

There are ticking sofas to recline on while you enjoy Adnams real ales, or leather armchairs for taking coffee and cake in the morning. People watching does not get better than this.

The menus are short, seasonal and simple, reflecting a modern appreciation of old fashioned dishes. The fruit and vegetables are sourced from Secretts in the Surrey countryside, mozzarella from Laverstoke Park in Hampshire, fish and seafood from James knight of Mayfair, beef from the estate of the Queen Mother’s former residence, the Castle of Mey in Scotland, pork from Kilravock Farm in the Highlands, beer from Meantime Brewery in Greenwich, chocolate from Rococo, ice-cream from St.Judes and spirits from the copper distillery of Sipsmiths. The management and staff travel widely to track down the artisanal suppliers that produce quality ingredients that are then not fussed with. 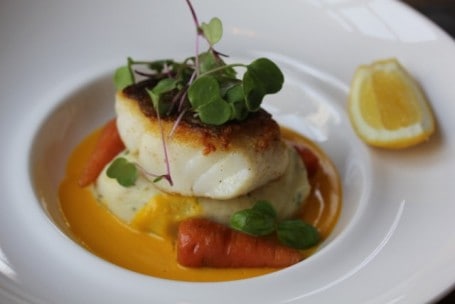 I had a starter salad of ricotta, roast beetroot and pearl barley, a good recipe for the “hunger gap” month of March, before the green salads start germinating. This was followed by line caught cod with an Arbroath smokie mashed potato and a creamy carrot and butter sauce.

All was good: light, well presented, well seasoned and beautifully presented. And there is something very uplifting about eating crisp, fresh produce in a large, airy room, filled with sunshine and gentle music, whilst the world of commerce bustles along the road beneath you.

During the evening, be prepared to book, even mid-week, because it is unlikely you will find a spare seat in the house. And because there are few carpets in the building the noise and chatter rises to the rafters, so if you are staying the night you do need to bear that in mind, because a popular pub is not a quiet space.

Each of the four bedrooms is named after relevant Pimlico landmarks or streets. The style evokes the French country house feel with rattan head boards, cushions, blankets and paints of a natural palette of sage, olive, earth and sand, there are wooden beams, La Chapelle sanitary ware, Lefroy Brooks showers and Damama orange scented toiletries, with no parabens or colourants.

There are plenty of clever and homely touches: “Cubitt House – upmarket but down to earth” letterpress monochrome postcards to send to your friends and family, with humorous Victorian imagery, a writing desk with magazines, stationery and pencils, a proverb book, a Pure wood radio, an iron and ironing board, your own tea and coffee making facilities with bright, zesty cups, mineral water, chocolates and even a continental-British plug converter. 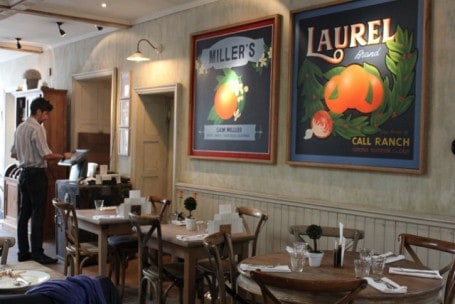 Expenses have not been spared in the refurbishment: the walls in the bathroom are partly covered in Carrara marble and partly in wood panelling, the linens, mattress and towels are good quality and absolutely everything works well and efficiently, from sash windows to the plumbing to the heating and the WiFi. You are well looked after and may well not want to go out. But think of what you are missing.

Just a few steps out of the front door you are in one of the most “charming streets of the 19th Century – a complete composition of semi-detached cottages of two storeys connected by one-storeyed links” {Pevsner, “The Buildings of England, London Volume One”, published by Penguin Books}. At number 180 Ebury Street Mozart wrote his first symphony in 1764.

During your perambulations do stop at the Daylesford Organic shop and café, where you can eat, food and homeware shop and learn beautiful styling techniques to your heart’s content: there is even an area downstairs where you can watch the food being made through a glass partition. The William Curley chocolate shop is just a few doors down from there.

Pimlico is interior design heaven and you will see many, notable retailers, antique dealers and designers including Nicky Haslam, Coote and Bernardi, Jane Churchill, Jamb, Czech and Speake, David Linley, Soane Fabrics and Joanna Wood. From chintzy country house to contemporary loft apartment, if you cannot find furniture and accessories here then you are unlikely to find them anywhere else.

You are also within walking distance of the apogees of shopping venues, Sloane Square and Sloane Street. Do also stop and admire the manicured pocket-Venus front gardens that pay homage to symmetrical topiary a la Versaille in miniature.

The Cubitt House hotel group is proud of its SRA credentials, established by the Sustainable Restaurants Association, which helps to promote eco-awareness and green practices within the hospitality trade, laying down 14 different categories of resource management.

Some of the measures put in place can be done by anyone, from homeowners to hotels across the land: filtering water and storing it in glass bottles, growing herbs and salads on a balcony or roof top, placing used towels to one side so that not all are washed unnecessarily, using nature friendly detergents with low surfactants and separating waste into recyclable components.

Breakfast is a particularly good time to come to The Orange: do try the porridge with homemade rhubarb compote and the apple, cucumber and mint juice – outstanding. Young mothers come in with their children before school as do business men for their meetings, there are newspapers on the front desk and both cooked and continental breakfasts on the menu.

The barman served one of the most accomplished cappuccini ever, with equidistant ripples of foam, marbled with scatterings of dark cacao powder, performed with a jug of hot milk and a stencil {methinks}.

This is a hotel you would not know existed unless someone told you, behind its cream and clean façade of propriety and solidity. It is a chic, clean, friendly central base to see the sights and eat well. Sir Thomas Cubitt would be proud of its existence on his erstwhile turf.