A 4am alarm call is not my idea of a great way to start the day but the promise of croissants fresh from the oven overcomes my slothful tendencies.  Not that I’d get out of bed at this time for just any croissant.  I know them to be the finest croissants in London and I’m not about to pass up the chance of tasting one just 30 minutes old.

By 5am I’m crossing London Bridge.  The sun is shining and the sky is blue, lifting the spirits of the nightshift workers, cleaners and deliverers, who are surprisingly numerous at this hour in the capital.  The irresistible aroma of baking is in the air as I peel back the shutters of The Little Bread Pedlar artisan bakery in Bermondsey.

A conversation with Anita le Roy of Monmouth Coffee  on the difficulties of finding good pastries in London had alerted me to an embryo business focusing on baking brownies and croissants.   Well, if Anita was impressed, I had to find out more.

After 10 years working as a pastry chef, Nichola Gensler began baking a small range of cakes and breads and trading as Cherry Pippin on Pimlico’s Tatchbrook Street market.

Success with this venture and encouragement from Leila McAllister of Leila’s Shop in Shoreditch as well as Anita le Roy, gave Nichola and partner Martin Hardiman the confidence to launch The Little Bread Pedlar (LBP).

The initial aim was to perfect the best artisan chocolate brownies and croissants in London and supply businesses they admired.  By the end of November 2011 perfect croissants were being biked across London.

Not that it was easy at first – managing with domestic equipment meant long hours.  Christmas saw them move into bigger premises and take delivery of better equipment, including a longed-for proving cabinet so they no longer have to get up in the middle of the night to attend to the pastries. 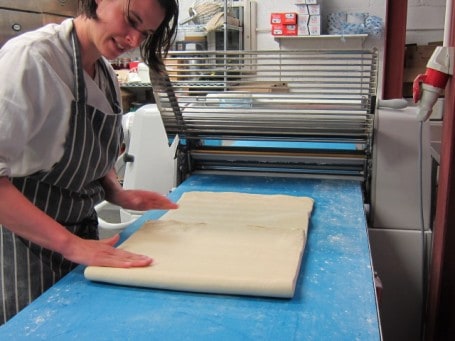 The move brought problems too, with becoming accustomed to new equipment creating the greatest challenge.  The hours are still long but they now have a good team including bakers Stewart, Hannah and Ruth who, amongst other things, pedals one of the covetable delivery bicycles.  It’s a tight-knit team and all are very much part of the “family.”

The three restored Pashley deli-bicycles are an important component in the sustainability of the business. Up till now new customers have been attracted by word-of-mouth recommendations and deliveries are only accepted if within pedalling range of the shop.

The long counter in the bakery was constructed from old pallets and second-hand boards rescued from Monmouth Coffee’s recent refurbishments.  Waste is kept to a minimum thanks to Nichola’s inventiveness, exemplified by her development of LBP’s ‘Parma Rose’ (a signature pastry).

A delicious curled bud of croissant dough enfolding excellent Parma ham supplied by their near neighbours The Ham & Cheese Company.  For now, consistency of the current range is top of their agenda.

Provenance of ingredients is of utmost importance – organic flour comes from Shipton Mill, eggs are organic and free range the butter is by Lescure and the chocolate is by Valrhona. 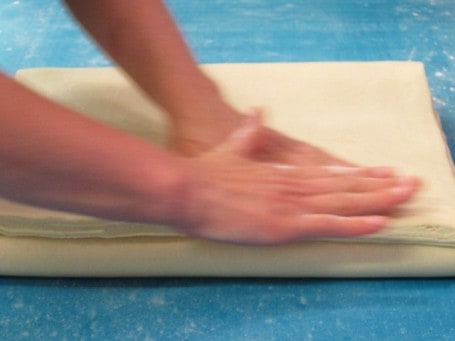 By the time I arrive bleary-eyed on this sunny morning, Nichola and Martin have already been hard at work for around two hours.  Nichola and assistant baker Hannah are absorbed in checking the proved croissants, pains aux chocolat and aux raisin ready for baking.

Nichola will also hand-shape the brioches.  A glass of Martin’s pour-over of Colombian Tunja Grande coffee and a just-baked buttery shortbread erase the memory of that shockingly early alarm call.  A few golden brown, flaky croissants are already out of the oven, but there’s much more to come.

Soon the pace quickens and tray after tray of plain and almond croissants, pains au chocolat and aux raisin make their way in and out of the ovens along with the Parma Roses.

Previously-cooked and cooled chocolate brownies are cut to add to the orders.  By 7.00am the delivery bikes are loaded up with one destined for customers in West London and another headed East.

As the bakery falls quiet there’s time to talk before afternoon preparation for the following day’s bake begins so I take my opportunity to ask Nichola a few questions:

Q  Nichola, here did you work before starting your own business?

A “I’ve been a chef for eleven years and worked in a couple of places in Glasgow before moving down to London. I was at The Anchor and Hope in Waterloo for three years and then at St. John Bread and Wine for a year.”

Q  Who or what has been the biggest influence on your career since you started?

A  “I have to say my Mum! For two reasons: Firstly, she has always encouraged me to follow my dreams and never pressured me to do the wrong thing for the right reasons. Secondly, she hates cooking and as a consequence I learnt to cook as soon as I could because I love eating!”

Q  What made you take the leap to set up your own business?

A  “Martin did, and the fact that I didn’t want to get to 40 years of age and still be sweating it out in a kitchen, running around doing service.”

A  “I would say they need to be prepared for long shifts and anti-social hours.  On a lighter note, always carry a little plastic scraper: they are useful for almost every job!”

Q  What is the key to a really successful croissant?

Q  Can you explain the effect of a slow fermentation on the finished croissant?

A  “I think that slow fermentation ensures a more complex flavour profile for the finished croissant and improves its keeping quality, sometimes staying crispy until the next day.”

A source of inspiration for LBP is the award winning Tartine Bakery in San Francisco.  Tartine espouse the philosophy of “Fresh bread for dinner –  toast for breakfast” to encourage customers to buy their bread on their way home from work.  Tartine don’t do cupcakes, and you won’t find them at LBP either!

After my early morning experience I’m keen to see the full preparation and baking cycle so I return a few days later to see afternoon operations.  The croissant dough having been formed, there’s the “laminating” (folding), rolling, cutting and shaping.  ‘Parma Rose’ buds are wrapped and the butter-rich brioche dough is mixed.

The proving cabinet is pressed into service to allow a slow, controlled overnight  fermentation.  A batch of morning-shift croissants are split, filled with almond paste, and topped with split almonds to await a further bake.

Then it’s time for a late staff communal lunch, some paperwork, calls to return and maybe, just maybe, a few hours to relax.

So far the one thing LBP have not had to work hard at is attracting customers.  The business is growing at a manageable pace.  Quality and reliability is of paramount importance to them.

“There’s no let-up” but they are determined to “never let anyone down”.  Recently they’ve added a few notable cafes to their customer list – Association, Rough Trade, Café Oto, and Reilly Rocket.

LBP isn’t planning to let the grass grow under its feet.  The bakery already opens on Saturdays only for retail trade.  A small selection of breads are added to the bake, including an amazing ‘Butter Bread’ invention, Bakewell tarts and individual bread puddings with a twist, so the Friday night shift is somewhat busier.

Very soon Nichola and Martin will be opening a little neighbourhood café in nearby Abbey Street, which will allow Martin to indulge a passion for coffee.  It will be nothing fancy, just a modest little spot where locals and those passing through Bermondsey can be sure of a good cup of coffee and a great croissant or a fantastic brownie.

I did, by the way, get my 30 minute old croissant that morning, and it was as sensational as I had hoped.