When I interviewed Tom Herbert in June of last year I remember asking him why the Hobbs House Bakery, with its four shops, baking courses and bistro-cafe, had not yet published its own cookery, baking or patisserie book. There are not many family businesses still standing in Britain which have a 120 year old track record of success in the world of baking, and Tom, the fifth generation scion Marketing Director, would make the perfect author of such a work. Soon afterwards, towards the end of 2011, the butchery next door to the Chipping Sodbury High Street bakery in Gloucestershire became vacant, and Tom’s brother Henry and his wife Jess took over its lease to spearhead the new Hobbs House Butchery.

It did not take long after that for the television production company Betty to negotiate a commissioning deal with Channel Four, and within a few months Tom and Henry were in a studio in London shooting the episodes that resulted in “The Fabulous Baker Brothers”, still showing on prime-time screens, mid-week to a very vociferous audience. Run through the Twitter feed of the shortened hashtag #TFBB and you will see the many appreciative comments from across the #RealBread community, from both professional and amateur bakers. And lots and lots of women.

To coincide with the series Headline, an imprint of Hachette UK, have created the recipe book, photographed by Chris Terry and printed, thankfully, in Britain by Butler, Tanner and Dennis. In it you will find many of the recipes that the business has been using over the years as well as the many personal additions garnered from Tom and Henry’s own years as ardent hunter, gatherer, industrious foodies. 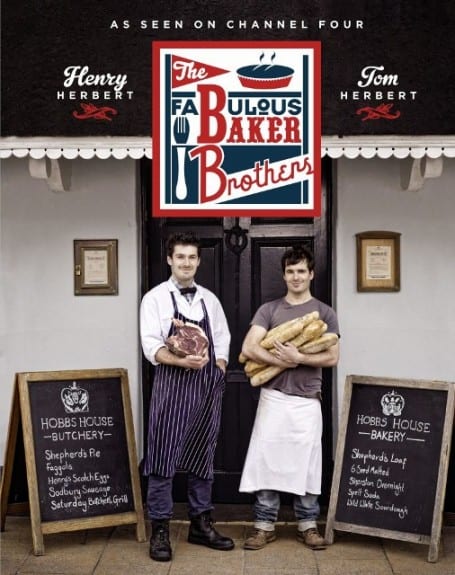 This story is one of provincial English history and its larder, of a Cotswold artisanal family that has lived and breathed wheat, mills, flour, night shifts, loaves, cakes and commerce through world wars, recessions, financial hardship and social change. This is a book for proper, slow reading. There are very few artisanal families like the Herberts left in Britain, and Tom and Henry tell their story with humility and honesty. It is not easy working in a family business, and it is refreshing to find such irrepressible enthusiasm for craft untempered by time and challenges.

If you know of someone who has thought they might like to try making their own bread for the first time, then this book is both user friendly and relaxed. The language is sometimes excited (Steaming? Then GO! Get the dough in … see how it’s sprung. Ace), sometimes demonstrative (Wheat has gluten-forming ability which gives it the power to s-t-r-e-t-c-h) and always inviting (Bread on the table is a sign that all is well, and to have the ability to make it yourself is one of life’s top joys).

There are 100 recipes in total, and tweaking of each to make it your own is encouraged at every step. You start at the very beginning with plain white loaves, wholemeal tin loaves, harvesters and cobs. You now have the essentials to move on to the heart of the matter: recipes segue for chip butties, fish finger sarnies and duck liver and guinea fowl toasties. Holy, sacred breadcrumbs, the manna of all frugal housewives, reclaim their rightful place at the table of glory with Wiener Schnitzel, chicken Kiev, a winsome trio of Raj, Croque Madame and Harris Scotch eggs and rhubarb queen of puddings. The invocation of retro and regional speaks to the spirit of our times: it is food our generation likes to cook, buy and eat, inexpensive, easy and delicious. What the book lacks in recipe innovation it makes up for in terms of personalised re-interpretation.

Flatbreads are given a wide repertoire of fillings: pork shoulder, slow roast lamb with garlic yoghurt, beetroot and red cabbage slaws and tandoori style chicken. By the time you have arrived half way through the book you are ready to create your own sourdough. From there limitless toasted platters present themselves: devilled lamb kidneys on toast, lamb sweetbreads with capers and parsley, pate de champagne, trencher with hanger steak and mushrooms and potted shrimps.

You will have surmised by now that the cooking is wholesome, fulsome and atavistic. Henry Herbert was a chef at The Coach and Horses in Clerkenwell and gained a redoubtable reputation for his simple, robust, British cooking. There is a whole section of the book entitled “Things men like to make”, which he told me is “For blokes who want to impress their girlfriend”. Within it you will find The Full English Breakfast, Beef Wellington, gooseberry and elderflower pies, “Get out of trouble chocolate cake”, spicy Easter biscuits and buttermilk puddings.

Although deeply interested in their dinner and wanting to lay a spread that is eye-catching and flavoursome, the buyers of this book may well be easily distracted by the skilful art direction and design by Smith and Gilmour, the brains behind some of the world’s best loved cookbooks. There is beautiful photography of the background scenes behind the bakery, enchanting line drawings by Johanna Kindvall, logos of the Hobbs House wheat crown and glass timer for slow dough and little brown paper hints and tips labels. For a book that was put together at lightning speed, to comply with the commercial imperatives of a television series launch, it is commendable how thorough the measurement and methodology of the recipes have resulted.

2012 is off to a good start: The Fabulous Baker Brothers has set a new benchmark of cheeriness, youth and industry in the world of cookbook writing. Just like an episode of The Waltons or a browse through the canon of old family, field and farmhouse recipe boxes, this work cannot fail to make you smile, celebrate good food and want to have a go. Let’s all hope a second series is commissioned.