Tall native foxgloves nod me through the long lane that leads to Elisabeth Luard’s marshmallow pink Welsh farmhouse. All around me is the rolling pastoral landscape of Ceredigion, a beautiful part of mid-west Wales that leads onward to Aberystwyth and the sea. I have come to meet one of Britain’s most loved food writers, multi award winning author of a dozen cookbooks, autobiographies, novels and scores of articles and features, published in a wide range of magazines and newspapers, from Country Living, to The Oldie, Zester Daily and Waitrose Kitchen.

Elisabeth Luard’s work has formed the essential backbone reference bible for many of today’s new food writers and bloggers. Using the tomes “European Peasant Cookery” and “European Festival Cookery”, nearly every week since they were published by Grub Street, I am not surprised at the devotion she inspires in cooks. She has a rare gift in that her cookbooks are not just recipe lists, but contextualise and embed the sourcing, preparation, cooking and eating of food in their proper geographical, historical and socio-economic settings.

“Just because we are women in the kitchen, that does not mean we are dumb” she says. We are sitting in Elisabeth’s kitchen, surrounded by the everyday pots, pans and utensils she uses for cooking for herself, her four grown up children, now spread between New York and London, and her seven grandchildren, when they come to stay in the school holidays.

“Food and domestic life are without doubt the final bastions of reference to people’s identities. You are how you live and eat: domesticity defines you, and in particular cooking. Through knowing about food history, and understanding how food has moved around the world, we can learn so much about who different people are, and where they fit in society” she explains.

Elisabeth has led a peripatetic life, and she has travelled and lived across the Atlantic, in Spain, in France, in the Outer Hebrides and now in this elegant, albeit not grand farmhouse, in this isolated spot in Wales. It is from here that she has written her latest work “A Cook’s Year in a Welsh Farmhouse” published by Bloomsbury and photographed by Clare Richardson (see my book review in the “Cookbooks” section)

She tells me that she is never lonely here nor feels cut off from the world. “I am a very keen user of the Internet and I totally embrace new technology. I use Skype, I keep in touch with everyone and I am very fortunate that my neighbours, Will and Jane Edwards, have always looked after me so well since I came to live here.”

Elisabeth’s house was inherited by her husband Nicholas Luard when his godmother, Monica Rawlins passed away. She had lived in the house for many decades, having come to live here from Bath. Elisabeth tells me that Monica was born into a very genteel, aristocratic family, and she loved to sketch and paint. After the second World War, a new artistic movement, The Romantics, flourished in Wales, and she and other artists, like Augustus John, admired the beauty of the bucolic Welsh landscape and portrayed it in their work.

“When she left the house to us in her will, I said that I would only come to live in it if she did not come back to haunt us!” 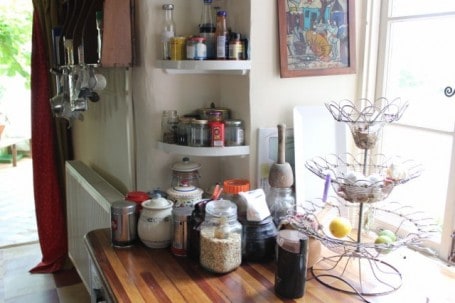 She has been made to feel very welcome in this remote community. “The doors are not barred here, it is a welcoming area, and there is a deep-seated tradition of hospitality. The locality is 600 feet above sea level, it is an agricultural area, farmers are engaged in growing grain, barley, oats, potatoes, carrots and leeks. Landscape has always dictated how people have lived and what they cooked and ate. It always take time for people to accept you, but wherever I have lived in the world I have found that food is the common language.”

Elisabeth shows me the griddle that she was given as a present from her neighbours when she moved in. I recognise the shape as the sort of metal plate upon which Italians might cook pizza, focaccia and schiacciata, and we both agree that, despite differences in latitude and longitude, human beings use more or less the same equipment all over the world to make themselves their daily repasts.

“You really do not need much more than a skillet pan, or a griddle and a cawl pot” she adds. Looking round me, however, I can see so many beautiful things: earthenware pots, cast iron pans, maiolica painted plates, handblown glasses, aged wooden bread boards and a walk in pantry. On Elisabeth’s wooden kitchen some hand painted Spanish tiles have been inserted, flush with the surface of the wood.

She grows as much of her own food as possible, in her square, raised bed vegetable and herb garden at the side of the house, but otherwise drives to nearby Aberystwyth for her main shopping. Tregaran butchery is the best in the area, and looking out at the sheep and cows in the green fields and meadows all around us I am not surprised.

We talk at length about how many modern women consider cooking as anything but a chore, hence the lack of cookery education for young and the health problems that have ensued as a result. The Industrial revolution took place very early on in Great Britain, in comparison to the rest of Europe, and there followed a disconnection between education, people and communities away from the soil. Growing food and cooking it were activities worth little currency.

“Why is it that McDonalds, Burger King and ready meals in supermarkets have now become the food of the less well off, instead of the bean stews that are still prevalent in swathes of Europe? If you look at the food of the old French “paysans” or the Italian “contadini”, they ate wonderful, healthy, seasonal food, which many have come to appreciate as delicious and desirable. Even the words themselves are not pejorative, but refer to a simpler, healthier lifestyle. Sometimes I may wander into the supermarket and look at the ready made Peking duck and think to myself that the photograph on the box looks really wonderful, and the food inside the box must surely be delicious. But when you take it home and reheat it, it is so disappointing. And the box says “Feeds two people”. The actual truth is it hardly feeds one and a half pygmies!”

In the Italian culture many white collar workers and city dwellers look to the “contadini” as a special source of inspiration and reference when it comes to learning about the countryside and crops. It is an aspirational lifestyle they wish to emulate, away from the stresses and strains of urban imperatives, and not one they deride.

We both laugh out loud at the foams, drizzles, gels and nonsense sold at overinflated prices in overhyped restaurants up and down the land: a novelty, that sadly, rather than dying, is spreading virally. Elisabeth once attended a lecture and cookery demonstration given by Ferran Adria of El Bulli, and as he only speaks Catalan all the attendees were provided with English translation ear phones. Having lived in Spain for many years, she is fluent, and so she could hear and understand what Ferran was really saying. One sentence was not interpreted, and in it he said “I cannot sell food that costs so much money per plate, which people have to travel so far to eat, by just doing simple home cooking.”

Maybe it is the prevalence of this sort of cooking, so widely televised and acclaimed that has driven women away from the kitchen, in fear that they will be judged for their efforts. We both agree the key to reducing the £275 million ready meal market in the United Kingdom is through education. Elisabeth regularly cooks with her grandchildren and also does cookery demonstrations at their school. She enforces this rule whereby the children must only wash their hands before they cook, and not during the preparations. “If they are making bread” she explains, “Or something that requires contact between the ingredient and the hands, it is important that children get stuck in.”

We go outside to the kitchen garden, through a conservatory filled with pelargoniums and rambling vines. Elisabeth cuts rucola, herbs and leaves to put in our bean stew. We sit opposite one another at the kitchen table: slices of sourdough bread are cut, there are pieces of bottarga she was given by a friend, and in the stew there are really delicious, soft and salty sausages and jamon.

Pudding is a lovely orange custard cream, wobbly, juicy and zesty. We drink strong black coffee in hand-thrown little coffee cups Elisabeth bought when she lived on the Isle of Mull.

She has been extremely busy organising the 30thanniversary of the Oxford Food Symposium celebrations in early July. People are coming from 30 different nations and there are going to be different platters from each region represented at the Symposium, including Welsh lamb cooked by Shaun Hill of The Walnut Tree Inn near Abergavenny. Elisabeth is e-mailing, co-ordinating and marshalling support from every corner, wanting the Symposium to spread its reach. “It is completely open to anyone who wishes to attend, the tickets go on sale and are available on a first–come–first–served basis.”

She leads me into her study, where she needs to check her e-mails. As she opens the door I gasp. Before me is a huge room, the size of a village hall, walls lined with cookery books, and a minstrel’s gallery on the first floor. Elisabeth’s writing desk is positioned at the foot of the stairs, where I can see her Apple Mac and notebooks. Stretching out in the middle of the room is an enormous wooden table. She is an accomplished painter, and her illustrations have been used in her latest book. This is a room filled with art, writing, creativity, thinking, planning and communication. I could sit in it for hours.

Yet Elisabeth does not stop or rest: fit and fascinated, her mind and brain are as sharp as a new box of pencils. It’s time to get back to her work, and as she waves me goodbye, pulling out two random weeds from her flower border, she tells me she is going off to London later on that very evening, but before that she will sit on the ride on mower and deal with the long grass. As I get in the car to drive away she shouts “See you on Twitter!” I really hope I will. Imagine that: Elisabeth Luard chatting to a whole new generation of food bloggers and cooks. She would not be short of followers.