Analyse the shelves of any big bookshop and you will see that the theme of larder cookery is bigger than ever before. From preserves, to cured meats, pickles, chutneys, condiments, liqueurs, charcuterie and confit, the focus of home cooking is returning to the most important repository of all our hunter-gatherer-cooking endeavours: the pantry.

It is with this notion in mind that Thane Prince decided to write what is now her tenth book in her 25 year cookery career. Called “Ham, pickles and jam” it is published by Anova Books and features over 250 pages of some of the most important skills all of us home cooks can learn in our recessionary quest to make as much of our own food as we possibly can. She describes this human longing in her introduction:

“I think our yearning for larders is due to a longing for certainty in our wonderful but frantic world. Everything is transient, available and allowed. How nice then to remember and recreate a space where things are stored, left to mature, kept for special occasions and emergencies….Where thrift and economy go hand-in-hand with the skill of a good housekeeper.”

The book is divided into 12 different chapters and can take even the novice cook through the most important and alluring of all the disciplines in larder cookery. We learn about cheesemaking, marinating, salting, curing, pressing, rendering and brining, to name but a few in a long list of preserving techniques. From raised meat pies, to game terrines, potted shrimps, rillettes de canard, Christmas cranberry chutney and Panforte di Siena, this is the recipe book for those days when the chill of the north wind and shortening pewter days have us think of those traditional foods that our thrifty ancestors would have been hoarding in cold, dark, dry corners of the farmhouse.

I went to meet Thane at her house in North London to find out more about her new book and to learn about the journey that led to its creation. It is certainly a very beautiful book, one that would make a prized gift for the recipient, with a handsome cornflower blue hardback cover. Diana Miller’s sensual and evocative photography and Sue Rob’s childlike, naive line drawings make this work a comforting, fireside treat. 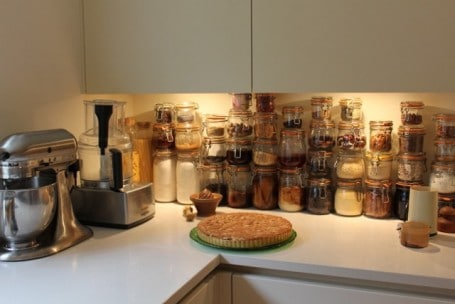 Like Delia Smith, Darina Allen, Clarissa Dickson Wright and Mary Berry, Thane’s books are kitchen stalwarts, the recipe bibles you turn to when you need accurate, professional, trustworthy guidance on methodology and a reassuring narrative on the story behind the history of a dish.

“The idea behind “Ham, pickles and jam” was to bring back those skills that have been lost through the passage of time. By creating the world that was similar to the one our grannies grew up in we can feel safe against the cold and all the hardship of these difficult times. By understanding how things work, for example how fats are rendered and how jams are set, we can then understand how food can be made to last,” Thane told me.

“The ability to source, cook and store food for the family was once essential knowledge handed from mother to daughter,” she writes in the book, but she admits to me that she was never very good at cookery at school, and her sisters, one a dietician and one who has worked as a chef, both surpassed her in the subject.

Originally brought up in Norfolk, Thane became a nurse and looked after geriatric patients before she married and had children. She had always been very interested in eating good food, as her mother had always been a very good cook, and it transpired that, when her daughters started going to school, she began to share a school run with two Telegraph and Times newspaper journalists who were the parents of another child in the school. The father loved to cook and he and Thane swapped supper ideas and recipes. Thane was doing some cooking at the time for a delicatessen, but decided to enrol on an evening class to learn how to become a features writer, because she wanted to work for Good Housekeeping magazine. Part of her course work was to write an article all about a winter picnic. She showed The Telegraph journalist father her draft, he read it and the rest is history. For the following twelve years Thane wrote The Telegraph’s food columns, which made her a household name, along with starring in the afternoon television programme, Ready, Steady Cook.

“The fame part of it all was, yes I have to admit, very addictive. People used to recognise me in supermarkets and on the street, and I loved it. But those days passed, and fame is transitory. What really matters, at the end of the day, is your own personal worth, to yourself and to your family.”

The structure, tone and delivery of her writing has always been very didactic because, as she told me,

“I have always been interested in teaching people how to cook, first and foremost. I like to show people the different stages of cooking. My articles and books always explained and showed how all the different processes of the recipes would look like and feel. Above all I always made sure that all my recipes were tested many, many times, so that by the time they went to print they were absolutely perfect. The reader holds the food writer in trust, and if they spend money on ingredients and the recipes fail, you have wasted their money.”

She always knew that her tenure at The Telegraph would come to an end and that the baton would be handed over to another writer, which it was, to Tamsin Day Lewis, who was by the mid 1990’s quite famous. Perhaps the newspaper wanted a younger, celebrity voice.

“The Telegraph threw a big party for me, they bought me a lovely present and it all ended very amicably. I knew that the time had come to search for pastures new, and that is exactly what I did,” she explained.

Knowing the area very well, Thane and her family decided to move to the Suffolk coast, to Aldeburgh, to set up the cookery school that was to become, in a very short space of time, internationally renowned as a centre of excellence for the sourcing, preparation and cookery of good, seasonal food.

“I really gave the cookery school 110% of myself. People were coming from far and wide, for what was really an expensive day out or trip. They were coming to see me, so the pressure was very much on me to entertain, explain, perform and engage with the students. I am immensely proud of everything we achieved in the cookery school, they really were very joyful times indeed. I still remember going down to the seashore with the class to talk to the fishermen, and we would buy the best of the catch: fresh lobsters, clams, crabs and mussels. We would bring all our ingredients back to the school and cook a wonderful lunch with wine. There was a lot of laughter.”

Winters in a British seaside resort can be pretty grim, however, and after 12 years she decided to return to London. Her husband Bob, who used to work in project finance,  was now retired and her daughters lived in this area.

“It came time to leave Aldeburgh, and the cookery school could not be sold as my name was very much at the centre of it all. The scheduling of the bookings was really relentless, and we worked 18 months ahead, so it was very difficult indeed to plan family holidays or to have away days. The time came to move back to London, so the school closed down. We bought this house, and set about renovating it all, from top to bottom, but we do still have a flat in Aldeburgh, so that we have a bolt hole for when we want to get away.”

Thane and Bob found the exact house they wanted within a stone’s throw of some of North London’s very best restaurants, delicatessens and food markets, and after three years it is looking pristine, pretty and polished. Steve Hatt, the fishmonger and Frank Godfrey the butcher’s shop are her regular haunts, and Thane is as busy as ever cooking for her family, for charity and for her recipe writing and she is also a regular on the cookery school teaching circuit.

We eat a delicious lunch of pan fried sole, potatoes with rosemary, an endive salad and a perfect Bakewell tart while Thane tells me of her plans for the future. She is looking forward to organising private cookery courses and food and wine matching courses in her own home for smaller groups of around 5 people. She wants to continue writing her Blog, and despite having already written ten cookery books, of which several have been best sellers, she does not rule out another book, although she does find the process of writing quite solitary and lonely. She has embraced all the advantages of modern technology, and has already created a notable presence on social media.

“I really love Twitter. It enables you to connect with so many like-minded people. If you are interested in human communication then Twitter keeps you on your toes.”

She hands me a jar of her own homemade mincemeat to take home, and its delicate scent lingers on the plastic bag surrounding it in my handbag on the train journey home.

I balance my bag carefully on my lap and read “Mincemeat is a treat, a luxury preserve, so big juicy raisins and plump currants are called for” in Thane’s book. I always bring an author’s book with me to interviews, but invariably lack the courage to ask for an autograph, as the right moment never seems to arise, and I feel foolish. As I peruse it, turning pages slowly, the neighbouring passenger on the seat in front of me, a lady of my age, nudges her husband and nods her head towards its cover. “Darling”, she whispers, “that’s the sort of book I want for Christmas.” The tweed coated gentleman looked at me smiling, waiting for me to smile back to leave the path open for conversation. “May I enquire if it’s any good?” he asked courteously. “Oh yes, I replied. “It’s very, very good.” I passed it over so they could take a look. But I am Italian and proprietorial about my food, so I said nothing about my mincemeat.