Hill End Farm is a 200 acre working dairy farm on the outskirts of Britain’s longest village, Brinkworth in Wiltshire.  It comprises a closed milking herd of 100 Friesian cattle, and a thriving cheese, butter, yoghurt, ice-cream and fresh milk and cream business on the side of the farm.

Ceri Cryer, the daughter of farmer Joe Collingborn, was determined, along with her husband Chad, to diversify the family’s activities at Hill End away from solely dairy farming, an industry beleaguered by falling milk prices, high production costs and aggressive supermarket buying practices.

She is the 5thgeneration cheese maker in the family, the activity having been established here by her great grandfather in 1910, and she felt passionately that she wanted to live and raise a family in this beautiful, pastoral landscape. Finding the economic means of staying here meant adding value to the milk and so Ceri’s Cheeses was born in 2005. 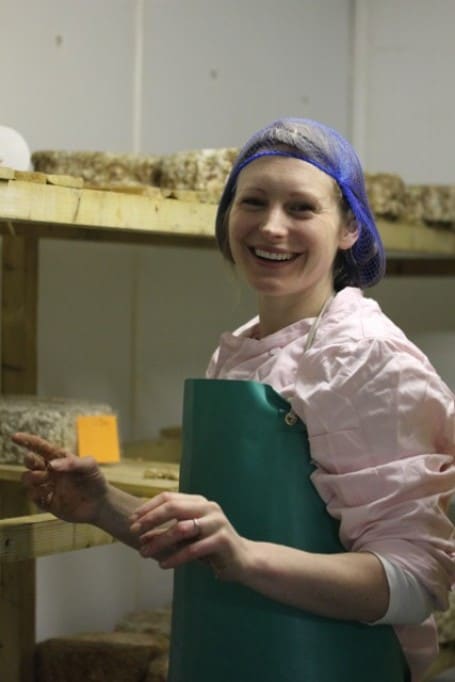 In my tour around the dairy I admire the large stainless steel milk tank and Ceri tells me it was her engagement present from Chad, who is a professional beekeeper. She tells me how she started, putting together her family notes and recipes for her cheeses.

“In the very beginning, I researched a book called “The History of Wiltshire Cheese” by Avice Wilson. I also looked carefully at notes of how my family made cheese in the past, and putting together all of the ideas we decided to make four kinds of cheeses.

80% of our cheese sales are at farmers’ market, and I think having variety there is important. So we take the yoghurt, butter, milk, cream, honey and, in the summer, the ice-cream to give customers the widest range possible, all on one stall.”

A soft, vegetarian, pasteurised cheese, flavoured with garlic, pepper and other spices, a hard North Wiltshire loaf cheese (my personal favourite), a soft, creamy blue cheese called Brinkworth Blue and Wiltshire Blue, a medium strong mould-ripened cheese are all made here, in a creamery that was originally a cow shed.

Ceri bought much of the equipment second hand from businesses that were shutting down, and went to learn the art of cheesemaking from a number of different sources, including Reese Heath College in Devon and Chris Ashby of AB Cheesemaking.

She also visited Liz Godsell’s Gloucester cheese dairy in to see her techniques, but in the end cheese making is about local terroir, and the flavours that are created here are unique to this area and to the specific genetic bloodlines brought down through the closed herd. There is history behind Ceri’s cheeses.

“Wiltshire Loaf has a long heritage: it was mentioned in Jane Austen’s novel “Emma”, when Mr. Elton, who was up-and-coming in the world, served it for dinner. In North Wiltshire we have the lush pastures that enable cows to get such a rich, nutritious grass diet.

Further south in the county, the chalk downs are drier and less fertile, so this is where the expression “chalk and cheese” comes from, to mark the contrast. You can really taste the cow’s diet across the seasons in the cheese and we have written different descriptions of the tastes so that we can convey that to the customers at the market stalls.”

The Brinworth Blue is described as “creamy, hay, strong, humus, hazelnut and honey flavour” and the Wiltshire Loaf has a “strong, daisy flavour, buttery and creamy”. I use my Loaf cheese grated in risotti, on canapés with anchovies, to serve with homemade rosemary focaccia or in small pieces dotting a tomato and olive salad.

The young, creamy soft cheese is ideal to spread on sourdough toasts and topped with salame, chorizo, Wiltshire ham or prosciutto and both blue cheeses are ideal served simply with a plain cracker and honey.

Ceri now has two small sons, Bede and Abel, who are just toddlers, so she spends more time with them, ably assisted by her brother-in-law, Toby, Chad’s brother, who came from a busy, urban life in Newcastle to the quiet, rural calm of the outbacks of sleepy Wiltshire.

But calmness is not on the agenda in a working dairy because Toby is busy turning the curds in the 550 litre tank, draining the whey and aligning the moulds in rows on a long steel drainer by the window.

The air is warm and humid, cheese making is certainly not for the faint hearted: it is a wet, sticky, mouldy business where the delicate balance between scrupulous hygiene and bacterial fermentation is constantly at play.

The base of their cheeses is pasteurised milk, as there is always the fear of bovine tuberculosis even when there is none detected on the farm. Ceri uses vegetarian rennet and starter cultures and salt are added.

She shows me the various stages at which the moulds grow on the soft cheeses and tells me the different sounds the hard cheeses make as they are turned. 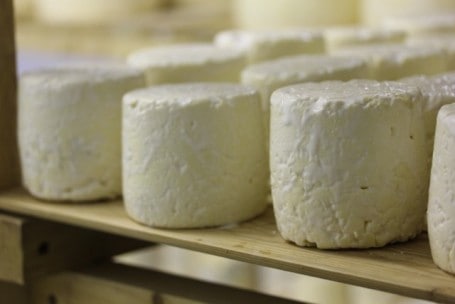 From the wide glass windows you can see out onto the surrounding fields, connecting the production of the cheese to the land from where the cows are fed. Placed just outside the building is a big tank filled with fresh milk from that morning’s milking.

The whey that is drained from the curds is then sent to fatten pigs on the farm. They also rear male calves on the farm to make rose veal, a fine British delicacy that we both agree should be served and appreciated more widely. Young male calves have access to open pastures, open hay barns and sunshine.

In one corner of the room is a Melotte butter churner for making the small rounds of butter which are sold wrapped in simple, white waxed paper, a white stripe indicating salted and no stripe indicating unsalted.

The maturing room for the cheeses has wooden slatted racks, made by Chad, and Ceri moves the slats along in order to position more 4 kg wheels that will be left to mature and turned for around three months. Each tank of milk makes around 55kg of cheese, or 11 big wheels.

She then begins work in the packing room, slicing, weighing, packaging, labelling and sorting out the products they will be taking to market. The 1stand 3rdSunday of every month they are at Newbury Farmers’ Market, on the 2ndSunday they are at Marylebone, on the 3rdSunday at Reading, on the 4thSaturday they are in local Wootton Bassett, at Stroud on Saturdays and at Queen’s Park in London on Sundays. They also do a local milk delivery by van.

Their cheeses are also sold at farm shops and to local pubs, such as The Red Lion in Cricklade, The Priory at Tetbury and Manor House in Castle Combe. Ceri believes selling through farmers’ markets is the best way to stay connected to the needs and feedback of the end buyers.

“Although you have to bear the extreme weather conditions, in a way having a stall at a farmers’ market is the most rewarding part of our job. It is the time when we can give a taste of cheese to a customer and see their immediate reaction and pleaure at eating something that you have made. It’s superb for feedback and I think being in touch with the end user is so valuable.”

Some cheese makers decide early on that they will market their produce through one or two distributors and affineurs who are then responsible for on-selling to delicatessens, food halls and restaurants. Ceri believes that putting all your eggs in just one or two baskets could be dangerous, and prefers to go straight to market, omitting middle-men.

Plastic crates are loaded and placed in a cold room for the following day’s drive, and two smart branded vans are parked outside. It seems surreal to be standing in a tiled cheese room one moment and straight out into a mud and straw farm yard the next, but the whole point of this operation is to bring the two activities together in a symbiotic relationship.

For the Yoghurts, which are sold in old-fashioned, white cartons with clips on the top, Ceri uses whole milk and skimmed milk powder as well as a starter culture. The mixture is left to incubate at 30 degrees Centigrade in a bucket. For the ice-creams they use natural flavourings such as honey and rosemary, apple and cider, ginger, fresh mint and dark chocolate chip.

The Henkelman vacuum packing machine sucks all the air out of the sliced portion plastic cheese packets containing the Wiltshire loaf, whilst the blue cheeses are wrapped by hand in parchment paper and then aluminium foil, because the bacteria in the cheeses need to breathe.

The whole process is very laborious, with each sticky label printed and stuck on individual pieces. Ceri’s hands move confidently, folding and turning the paper and foil, so that each parcel packet looks the same.

Now that the dairy is a thriving business the dilemma arises of who will look after the farm once her father decided to retire from it, as it is the management and wellbeing of the herd that enables fresh, quality milk to be supplied every day. It may be that employing a herdsman on a farm sharing scheme may be the way forward.

The success of farmers’ markets in Britain, the growth of the artisanal cheese sector and the deepening interest of educated foodie shoppers who seek handmade products from family owned businesses have ensured the success of small businesses such as these.

One of three sisters, Ceri knows that the financial security of Hill End Farm lies in maintaining high standards of production and continuing with the farmers’ markets. She already has one British Cheese Award under her belt, and it may be that with the help of friend and wholesaler Guy Athelsten, of nearby Athelsten Farm Foods, Ceri’s cheeses will reach the wider distribution and accolades they deserve.