Brazil, the largest and the only Portuguese speaking country in South America, has a wonderful variety of traditional foods. Brazilian cuisine is a result of a combination of key ingredients brought by different cultures that arrived into our country.

It all started with the colonisation by the Portuguese in the 16th century. During our history many other different nationalities introduced a variety of elements and dishes for example the Italians (pizza, pasta), the Spanish (empanadillas – empadinhas), the Arabs (spiha, lamb, kibbeh), the Chinese and Japanese (wontons – pastels). 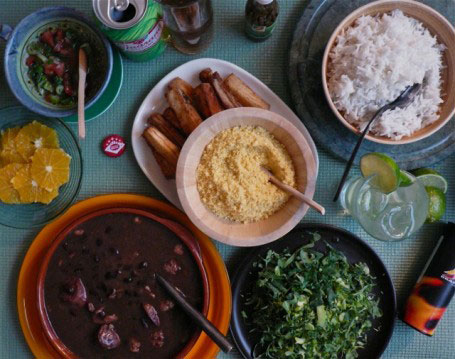 Mealtimes in Brazil are usually an event for family and friends. There’s always plenty of food for late or unexpected arrivals. It’s the time of the day to catch up and share special moments with loved ones.

Lunch is, most of the time, a substantial meal. Both lunch and dinner end with a small but strong cup of coffee. Food is customarily prepared from scratch; frozen foods are just another expensive commodity for the fast paced city workers.

Feijoada is without a doubt the undisputed national dish. It is a recipe of thick black bean stew served with rice and a variety of pork meats.

It was invented by the slaves who were brought from Africa, during colonisation to work in the large estates and plantations in Brazil. The slaves would smuggle the leftover food from their masters’ houses and make a stew. 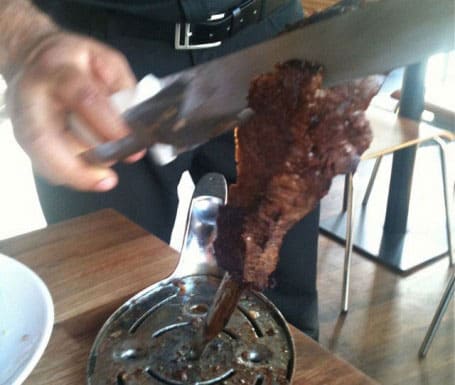 Originally feijoada was made using every part of the pig, for example ears, tails, feet and nose floating among the beans. Nowadays it’s a more pared down dish. It is usually served with sliced oranges, farofa (manioc), rice and shredded greens.

The culinary culture of Africa was mixed with the European food traditions. The African slaves had the basic bean stew, the Portuguese added the sausage (linguiça), and the native Indians added the farofa (toasted manioc flour).

This heavy combination of ingredients would give the workers the energy they needed to work all day in the plantations and cattle ranches.

Daily meals vary by region. At breakfast it is common to eat tropical fruits, like papaya, and local cakes, tapioca, couscous, grilled ham and cheese sandwiches, bread and butter or jam, coffee, juices or tea. Lunch is normally the biggest meal of the day. 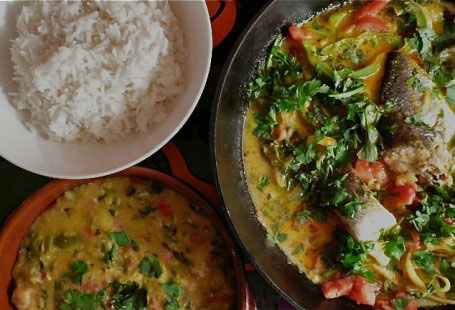 Rice and beans is a staple of the Brazilian diet. They are usually eaten with a protein (meat or eggs), salads, farofa (a toasted flour of manioc or corn).

The afternoon snack (merenda or lanchinho) is a small meal between lunch and dinner, and it could consist of coffee, tea or chimarrão, which is a traditional infusion of the South, accompanied by cookies, typical cakes or bread.

Dinner consists of a light meal of soups, salads and vegetables, and pasta and rice-and-beans are the most common dishes.

Feira (street market) is a popular Brazilian custom. These markets occur in the main streets of every neighborhood (bairros) in the country at least once a week. We are never far away from fresh produce.

You will find mainly fresh fruit: vegetables, fish, meats, spices but you can also find some oddities such as handmade coconut carvers and other local household goods.

They are also famous for selling pastel, a deep fried thin pastry filled with either savory fillings, the most common of which are minced meat, chicken, shrimps, mozzarella, palm heart and catupiry cream cheese.

There are also sweet fillings such as guava and cheese, chocolate, doce de leite, banana and cinnamon.  It is believed the Japanese introduced pastel into Brazilian cuisine by adapting deep fried Chinese wontons.

Pastel is usually served with pure cold freshly pressed sugarcane juice. In some regions of the country, it is common to drink it mixed with fruits such as pineapple, lime or mint.

Apart from the usual restaurants, we have “comida por quilo”, which is a self-service system and the food is charged by the weight; and all-you-can-eat at a fixed price, where you can sample a wide range of fresh dishes at inexpensive cost. It’s not uncommon to find street food stall, cafés, snack and juice bars open late night. 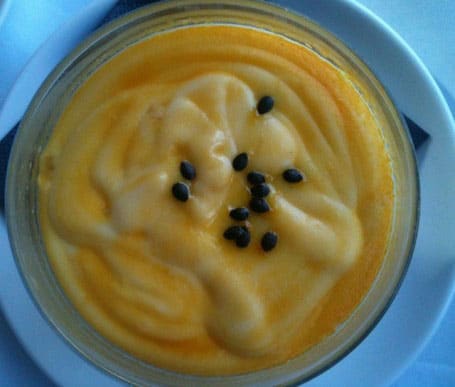 Parts of Brazil have a very rich soil and the edible crops available in each region and the different climates add to the distinctive characteristics and cooking styles of regional Brazilian cuisines.

In the South, there is an important influence of the gauchos, cattle estate workers, and this can be noticed in a cuisine that uses a lot of meat due to the high concentration of cattle ranches in the region.

The south is famous for the “rodizios de carne”, where various pieces of meat, including chicken hearts, are barbecued and served by waiters on skewers several times during the meal.

In the Southeast there is a great combination of ingredients including maize, beans, pork, cheese, tomato, fish and eggs. 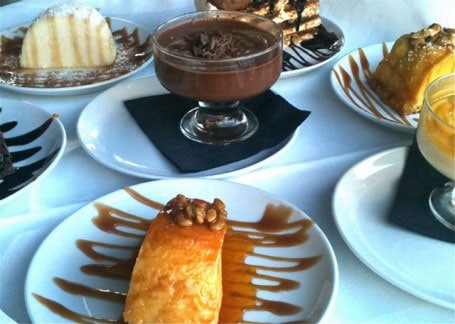 The central  region has a cuisine characterized by the use of much pork, fish, beef, soybeans and manioc. The northern area uses lots of tropical fruits, fish, peanuts, and manioc.

The cuisine of the northeastern region is characterized by using much local tropical fruits, seafood, local fishes, beans, onions and again, manioc.

Brazilian cuisine uses lots of root vegetables, which are rich in carbohydrates, such as cassava or manioc (mandioca, aipim, or macaxeira), yams, peanuts and fruits like açaí, cupuaçu, mango, papaya, guava, orange, passion fruit, pineapple, and hog plum (caju) are among the local ingredients used in cooking.

Açaí berry and Brazil nut grow separately in trees that are abundant in the north of Brazil. They are a popular national snacks and a lucrative export product believed to contain many health benefits. Açaí berries are consumed in bowls with granola, tapioca, or as ice cream, juices, tonics and to flavour liquors.

Other typical dishes are: acarajé (salted small cake made with white beans, onion and fried in palm oil (dendê) which is filled with dried shrimp and red pepper; caruru, which consists of okra, onion, dried shrimp and toasted nuts (peanuts and/or cashews) cooked with palm oil until a spread-like consistency is reached; moqueca Capixaba  (Espirito Santo State) or Bahiana (Bahia State) which uses coconut milk, and consists of slow-cooked fish, tomato, onion and garlic topped with coriander. It’s an indigenous influence.

Brazil is also known for cachaça, also known as aguardente, pinga, branquinha (translates as little white shot), a popular native spirit made out of sugarcane and used in the caipirinha (aguardente, caster sugar, fresh lime and crushed ice) our traditional and worldwide famous alcoholic cocktail.

Some traditional ingredients of our cuisine are not widely available in the shops outside Brazil. However, there are several Asian and Portuguese shops/delis that sell many Brazilian products in main cities.

Every time I cook or take my non-Brazilian friends to a Brazilian restaurant they fall in love with the different types of ingredients, spices, tastes, textures, colors and aromas. There are plenty of dishes to choose from.

It’s like nothing you have ever experienced before. I hope this article helps as a small introduction to Brazilian cuisine and that you have the opportunity to try or even cook it one day. It’s absolutely delicious!