Allium, in the beautiful Cotswold town of Fairford, is a small, family run restaurant that has grown from quiet, local beginnings to become one of the most accoladed and recommended eateries in the national press. Its mercurial ascent  has not been gained by chance, in an industry where hard work, consistency and grit are the obligatory pre-cursors to bookings and recognition. James and Erica Graham, the chef-patron and front-of-house husband and wife team at the helm of the Allium mothership, have earned their vocal, loyal following, and when I read tweets that they were organising the first of a series of “Allium Food Forum” cookery demonstrations, I leapt at the chance, before all of the 20 coveted tickets disappeared into aetherial cyberspace with a greedy click.

They organised the event with their customary meticulous attention to detail. On entry in the dining room, all the tables had been joined, so that the guests faced the front, chairs pointed towards James, his sous-chefs and their demonstration tables, replete with hob-cookers, mise-en-place bowls, ingredients and equipment. To watch James in action is a mix of Jamie Oliver’s cheekiness with Raymond Blanc’s precision and Alain Roux’s exhuberance thrown in, blended and seasoned with an almost messianic respect for terroir and the suppliers it sustains. I felt quite intimidated to be sat in an audience of unknown Gloucestershire foodies, all long-standing customers of the restaurant, many of whom have celebrated the significant milestones of their lives, birthdays, anniversaries and Christmas Eves nowhere else since it opened.

James prepared a pigeon sauce in front of us, which was going to be served with the roast wood pigeon breasts we were going to eat later as our main course. For our starters he mixed, whisked and beat twice baked goats cheese souffles into light, soft, melting submission, and for our pudding we had gorgeously fluid warm chocolate fondants, served with minute-quick ice-cream, frozen by a theatrical mist of  liquid nitrogen billowing its away across the tweed, pearl and cashemere filled room. Myths were debunked and methodologies symplified as James revealed the secret, hidden armoury behind sourcing, preparing and serving the thousands of meals in Allium’s seven year history, part molecular gastronomy, part Slow Food fervour.

Here, delivered in short, sharp nugget bursts of wisdom, is what I wrote in my Blog notepad to convey to readers: 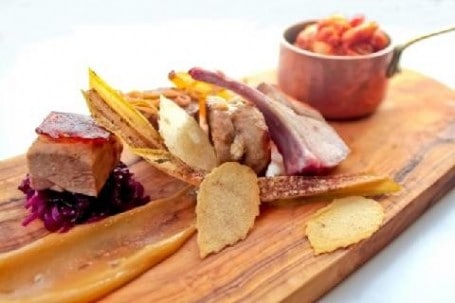 Throughout the demonstration, Erica’s careful eyes scanned the room: a wine glass to fill, water jugs to pass round, bread baskets to carry. I have never eaten such delicious butter in my life, spread thickly on homemade crusty, fluffy rolls.  James softens the butter and then beats it, until it transforms into a pale and airy mousse. Sat around me the gushing, gossiping gourmands described their love and devotion for Allium, how Erica and James are always helping and serving the community, coming to the rescue of an elderly neighbour, whose windows had been vandalised, after a heroic, marathon night shift in the restaurant kitchen. After a hernia operation a while back, James returned to the stove within three hours. Mother of two Erica once served in the dining room on crutches when she had a broken leg. They are living bastions of a rare, Trojan cadre within the hospitality industry that places respect for craftsmanship and customer at the pinnacle of diurnal endeavour. An exemplary food forum. Grab the next tickets while you can, this Gloucestershire crowd is zealous.