Patrick Holden CBE, the ex-director of the Soil Association and founder of the Sustainable Food Trust {SFT}, and David Wilson, the Manager of Duchy Home Farm, part of the Highgrove estate just outside Tetbury, organised a tour round HRH The Prince of Wales’ farm and private gardens in early April 2012. It was a priceless opportunity to learn more about the fundamentals of organic, sustainable agriculture and bio-diversity as well as being able to see The Prince’s horticultural philosophies at work in his home environment.

We all come together to hear more about The Prince’s speech at Georgetown University, which has been published as a book by Rodale under the title “On the future of food”. You can read my review of this important work here. 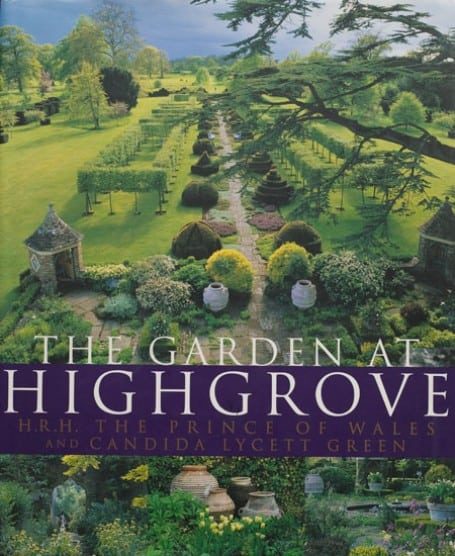 The tour began in the meeting-lecture room, housed in one of the barns next to David’s house on Home Farm, and everyone in the group had a chance to introduce themselves to one another in turn. I met Laurie David, the environmental campaigner and producer of the film “An Inconvenient Truth” presented by Vice President Al Gore, visiting Britain from the USA with her fiancé Bart Thorpe and their daughters. Laurie’s book “The family dinner book”, in which she encourages and informs families how to lead happier and healthier lives by cooking meals and sharing them together, is part of her ongoing campaigning work, which will include the production of a new film, to be shown globally, about the dangers of unhealthy eating and obesity, particularly in the young generation. Alina McNally, the wife of New York restaurateur Keith McNally, was also there with her children and I met William Miller, Director of Talent at BBC Worldwide, his wife Trina and their two daughters. Aine Morris, the Communications Director for the SFT and Guardian newspaper journalist Felicity Lawrence completed our party.

Patrick started the talk with an apology to all the children in the room:

“You are the new generation and you will inherit the earth that previous generations have damaged. That is why it is important to listen and learn from this tour, because there is still time to turn things around. We need a radical transformation of food and farming globally. The same system that you will see in place in this farm can be applied to any farm anywhere. You will see how a sustainable and resilient food growing system can be achieved by maximising soil fertility, recycling nutrients and encouraging bio-diversity.”

David Wilson showed us the map of Home Farm with each field divided into small 10 acre blocks by a network of native hedgerows that are home to nesting birds and other wildlife. Three year crop rotation systems are used to ensure the soil fertility is not eroded. In total David manages 1900 acres, all according to Soil Association organic certification standards, which they achieved in 1996. David has worked here since 1985 and in that time he has overseen many changes which were highlighted to us as we walked through the different fields and animal barns.

The soil at Home Farm and Highgrove is a mix of Cotswold limestone and some clay soil which overlies the calcareous layer. The PH is 7.8. Fertility has been increased in the last 26 years that the Prince of Wales has been at Highgrove by adding rotted animal manure, home-made compost and green manures which are dug into the soil. They include turnips, leafy brassicas and mustard plants which are also fed to the sheep. 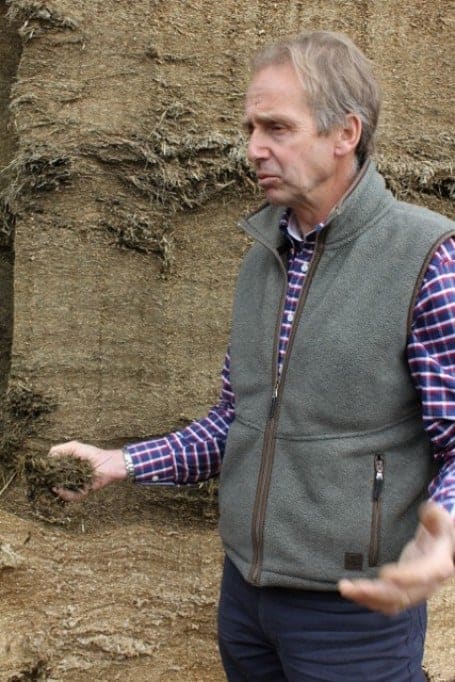 In the first three years they began the organic conversion process by planting clover, which is a legume plant that obtains nitrogen from the atmosphere and fixes it into the soil in organic forms for its own use as well as for the grass growing around it. Artificial nitrogen fertilisers emit potent greenhouse gases and require huge quantities of energy in their manufacture and transportation. Organic agriculture naturally suppresses aphid infestations owing to less soluble sugar forming in the cells of the plants. Nitrogenous growth in plants is sappy and full of sugary water which means aphids are more likely to flourish. As a result, conventional farmers turn to more toxic chemicals to kill the aphids that are eating their crops, leading to more soil and water pollution. 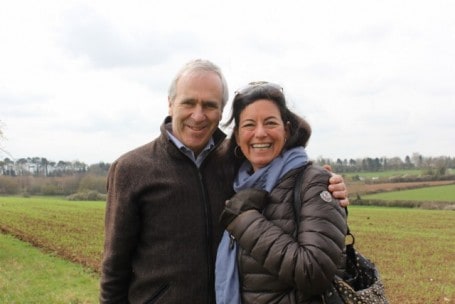 Patrick Holden stressed how important it was for the primary producers of pollution to pay for environmental damage, so that organic farmers are not penalised by their actions. At present organic food is unaffordable for most people of modest means, and subsidies should be recalibrated to support those farmers promoting sustainable farming techniques.

Clover is the magic ingredient in the success of the farm, as well as the dandelions, daisies, yarrow and mixed salad herbs that are planted amongst the grass. The Prince is Patron of the Rare Breeds Survival Trust and at Highgrove Tamworth and Large Black pigs, Irish Moiled, Gloucester, Shetland, Aberdeen Angus, Ayrshire and British White cattle and Hebridean and Cotswold sheep are all pasture fed, so clover is a very important part of their diet. This method of feeding animals was widespread before the Second World War and to this day is the best way of fattening animals to provide flavoursome meat. 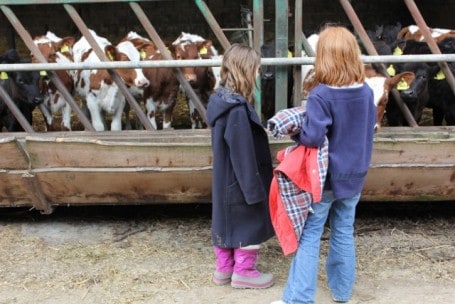 Both Patrick and David explained how important pasture foraging is for ruminants and how, in the future, the world’s increasing population will have to eat less white meat {pork and chicken} as grain based diets are dependent on unsustainably large quantities of water, fossil fuels, monoculture based forms of agriculture and chemical fertilisers.

Wheat, oats, barley and rye are all planted in rotation on the farm. There are also fields for all the fruit and vegetables that are sold in the Veg Shed and in the vegetable box scheme, delivering to customers around the Tetbury area. Home Farm is one of the suppliers to Duchy Originals, the food brand launched by The Prince of Wales in 1990 to produce high quality food whilst working in harmony with the environment and nature. A partnership agreement was signed with Waitrose, part of the John Lewis partnership, in 2009, whereby the supermarket chain could manufacture and sell food under the Duchy Originals brand name under license. All of the profits go to The Prince’s Charities Foundation, which last year raised £125 million for 20 different causes. 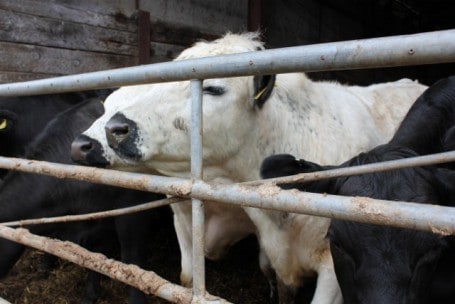 One of the most interesting parts of the farm walk was the silage wall. Here David told us how 2000 tons of grass and clover are cut and stored in high “tower blocks” each year. The layers of cut grass are aired and as the bacteria break down the sugars through anaerobic fermentation, lactic acid is produced and the silage is pickled. We all inhaled the very musty, rotten smell of decomposing vegetation, which David called “cut sunshine”. This dried form of nutrition is given to the animals during the winter, when the land is cold, wet and muddy. In conventional agriculture animals are overfed on soya proteins, to fatten them up quickly, which leads to a very dense, toxic smell on non-organic farms.

We saw the cattle in their barns and David told us about the rather complex breeding and insemination programmes. These barns have to be kept very clean as cows are prone to mastitis, and the manure is piled into huge mounds which are then left to rot and spread on the fields, thereby ensuring the continuous feeding of the soil. 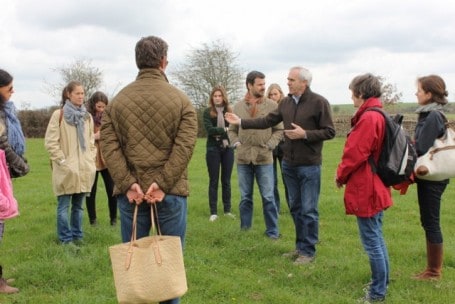 The dairy cattle are milked twice a day to produce 6300 litres each per year {as opposed to anywhere between 7500 – 10 000 litres each year in conventional farming}. On an organic farm cows are not over worked so that they remain healthy and resistant to diseases. David explained how farmers need a long term vision: in order for milk to be rich in nutrients, contain no chemicals and be healthy for the food chain the animals that supply it need to have a long as possible season on organic pastures and not be over-milked.

As we walked past native hedges that divide the farm into neat, patch work quilt squares, we were told how the Prince of Wales enjoys hedge laying, and takes part in the annual competition on the farm. One year, when the Prince was laying a hedge with his cap pulled over his head, one of the other farmers looked at him and said “Have I seen you on television before?” 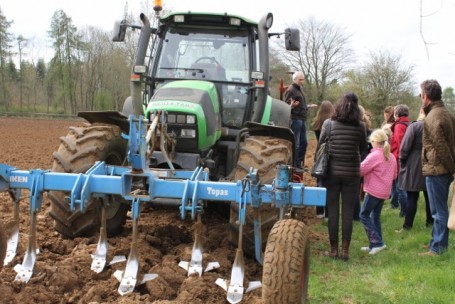 We stopped to look at a huge seed drill, which enables seed to be placed in equidistant rows. Patrick explained how, on his farm in west Wales, scarecrows need to be used with lights and noise making capability because the crows eat seeds that have no chemical dressing.

The highlight of the tour for me was seeing the 1000 varietals of the Brogdale apple tree collection which The Prince of Wales had planted in a field orchard next to the new Veg Shed building on the outskirts of Tetbury. On it is also a beautiful moveable chicken house with an electric fence to deter foxes intent on killing the free range chickens. 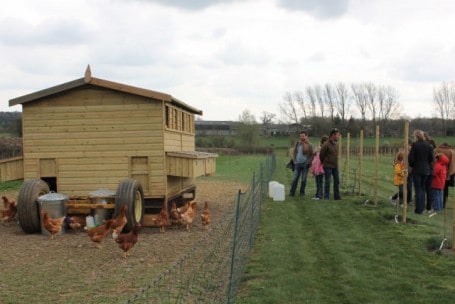 From there, and through a spring rainstorm, we walked around the beautiful gardens of Highgrove, which are another manifestation of The Prince’s environmental philosophy that it is better to work with Nature than against it.

When he bought the Highgrove estate in 1980, The Prince wrote “It was difficult to know where to begin and I knew nothing about the practical aspects of gardening.” His close friend Lady Salisbury was an experienced organic gardener and she helped to lay out parts of the garden with scented plants, like wisteria, honeysuckle, jasmine, holboellia, lilies and thyme, all planted in beds and avenues close to the house.

Miriam Rothschild, one of the country’s leading advocates of biodiversity, advised the The Prince on how to create an experimental wild flower meadow, which now has over 30 different varieties of endangered native plants including ox-eye daisies, yellow rattle, common spotted orchid, meadow crane’s bill and ragged robin.

The Prince is Patron of the NCCPG, which conserves the diversity of our plant heritage through its national collections. His Royal Highness has the National Collection of Hostas, and we saw them in the stumpery, which was designed by Julian and Isabel Bannerman. 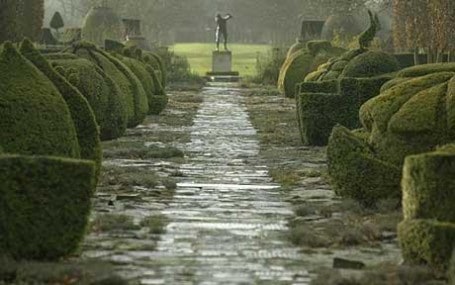 A specially built reed bed sewage system is used for all the waste water from the house. No seed or potting compost is bought in because it is all made from recycled waste matter.

The Walled Kitchen Garden was still very much at the start of the season, so we did not see a great deal of fruit and vegetables, but seeing the skeletal structure at the very beginning of spring was quite educational. I intend to return in May, when I was told by tour guide Helen Mansfield that I would be able to see all the fruit and vegetables grown for the house kitchens and the shop, which is inside the visitor centre.

Slugs, snails and caterpillars within the kitchen garden are kept at bay by using natural predators, birds are encouraged into the garden by several feeding posts and companion plants are used throughout to attract hover flies and ladybirds that eat aphids. All the rain water is collected from the roof of the house and channelled into water butts, only low energy electric lighting is used and all the waste from the house and visitor centre is recycled into the garden. Even all of the gifts that the Prince receives are found a home in the garden: from seating to statues there is an intriguing number of vintage gardenalia that punctuates your journey.

At the end of the tour we had tea and scones at the Orchard Restaurant, a really beautiful room specially designed for all the visitors who come here from all over the world, to learn how the organic practices used at Highgrove can be used to grow food and flowers in their own gardens. This tour brought together so many minds and ideas that are sure to create long term collaboration opportunities for the whole group.